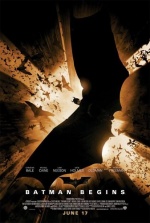 Bruce Wayne's parents were killed, a young boy received the trauma which led him into obsession to revenge. He travels Asia, where he is trained by a ninja fighter Ra's al Ghul. When Bruce returns home, he finds his native Gotham-city overran with crime and the Wayne Enterprises, his parents' corporation, slipped from his control. The hero is determined to bring peace and safety back to the city. Wayne and his allies develop a secret identity as Batman, a masked fighter for justice. But to defeat the mafia villains will not be so easy.