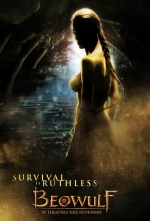 The Scandinavian mighty warrior Beowulf (Ray Winstone) has got orders from King Hrothgar (Anthony Hopkins) to protect his realm from a marauding ferocious beast named Grendel (Crispin Glover). Beowulf leads his brave crew of soldiers into a fierce battle with the monstrous troll. After defeating the evil creature, Beowulf incurs the wrath of Grendel's mother (Angelina Jolie) who slays his men in revenge. The courageous warrior sets out to kill the monster's mother who takes the form of a beautiful, extremely sexy woman and promises him wealth and power if he makes love with her. Beowulf succumbs to temptation and sleeps with her but in doing so he procreates a new curse, a dragon that is far fiercer, far more powerful than Grendel...

- Pride is the curse.