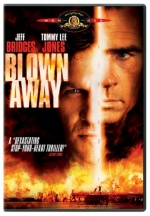 There's a serial bomber loose in Boston, and he has killed Blanket, a member of Boston's bomb squad and the best friend of explosives expert Jimmy Dove. Dove has just retired from the bomb squad to marry a violinist named Kate, who has an 11-year-old daughter named Elizabeth. Haunted by grisly flashbacks, Dove soon figures out the identity of the bomber -- Irish explosives expert Ryan Gaerity, a man who is so radical in his views that even the IRA wants nothing to do with him. Gaerity has escaped from the maximum security Castle Gleigh prison in Ireland, using a bomb made from ingredients that include blood, wool, and a porcelain toilet. Gaerity has fled to Boston, where he saw Dove, who had just disarmed a bomb planted in the Harvard computer lab, painted as a reluctant hero on TV. Gaerity was furious: it's because of Dove that he's spent years in prison. Dove was born Liam McGivney, and he used to be a naive Irish patriot. Gaerity recruited him and taught him to build bombs, and Gaerity conceived a terrorist plan that went terribly wrong. Liam helped Gaerity build a bomb, then he realized that Gaerity intended to detonate it on a crowded street. Liam tried to stop Gaerity from detonating the bomb, but bomb device went off, killing a lot of people, including Gaerity's sister. Liam escaped from Ireland and made his way to America, where he changed his name to Jimmy Dove. Gaerity was arrested, tried, and imprisoned until his escape. Gaerity, who has now taken up residence in an abandoned gambling ship called the Dolphin, has decided to get revenge on Dove, and Gaerity started terrorizing the bomb squad by killing Blanket. Now, Dove is the only one who can stop Gaerity.

User Reviews of Blown Away