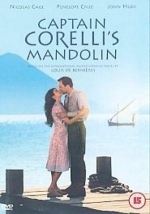 The idyllic beauty of Greece's Mediterranean coast has been invaded by Italy, bringing legions of soldiers to the once tranquil island of Cephallonia. Captain Antonio Corelli, an officer with an irrepressibly jovial personality and passion for the mandolin, initially alienates a number of the villagers, including Pelagia. The daughter of the village doctor, Pelagia is an educated and strong-willed woman, and while at first offended by the Italian soldier's behavior, she slowly warms to his certain charms as they are forced to share her father's home. When Pelagia's fiancee, a local fisherman, heads off to war, the friendship between Antonio and Pelagia grows even stronger. Her beauty and intelligence have captured his heart, and his fondness for the village's vibrant community causes him to question his reasons for fighting. Antonio becomes a part of the lives of the villagers, but the moment is fleeting. As the war grows ever closer, Antonio and Pelagia are forced to choose between their allegiance to their countries and the love they feel for one another-a love which must overcome tremendous odds, and endure the inevitable sacrifice which accompanies eternal devotion.