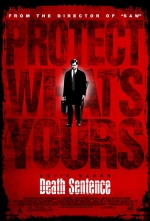 When a family falls victim to a vicious attack perpetrated as a gang initiation ritual, the vengeful father vows to track down each person involved in the crime in Saw director James Wan and screenwriter Ian Jeffers feature adaptation of author Brian Garfield's original novel. Aisha Tyler co-stars as the sympathetic homicide detective who questions her pledge to assist Bacon's character after suspecting that he may have turned to murder as a means of exacting his revenge.