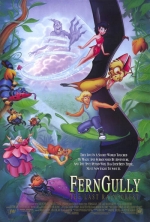 The life of plants and animals of the rainforest is under the deadly threat: bulldozers and other human machines are destroying trees and all tropical inhabitants. The other threat is that the evil spirit named Hexxus (voiced by Tim Curry) will be released if an old tree where he was confined long ago, will be injured by the bulldozers. Forest animals and mystic creatures should stop the felling: Krysta (voiced by Samantha Mathis), Pips (voiced by Christian Slater), Beetle Boys and Zak (Jonathan Ward) should prevent the forest from extinction. Zak is a human, who initially worked at the felling, but later he sworn to defend the beauty of the forest.