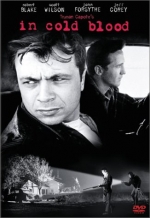 Based on Truman Capote's novel, the powerful crime drama relates a true story of the gruesome murder of an entire family in the rural town of Holcomb, Kansas. Ex-cons and homeless drifters, Perry Smith (Robert Blake) and Richard Hickock (Scott Wilson) learn from their inmate that the Clutters keep $10,000 in a safe in their farmhouse. After breaking in the house and finding no money, the criminals torture and brutally kill Mr. (John McLiam) and Ms. Clutter (Ruth Storey) and their two teenage kids. Perry and Dick leave the crime scene with only $43 and flee to Mexico, but they eventually return to the United States. The murderers make the mistake of cashing bad checks and end up arrested and sentenced to death.

User Reviews of In Cold Blood