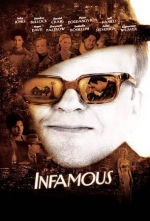 In the detective thriller, Truman Capote (Toby Jones), a famous writer for The New Yorker, reads a brief story about the brutal and senseless murders of four members of a farm family in Holcomb, Kansas. Intrigued by the story, he and his assistant and fellow writer, Nelle Harper Lee (Sandra Bullock), set out for Kansas to research the horrific case for an article. The deeper Capote digs into the story, the more convinced he becomes that it is too big for just an article, and he decides to write a modern non-fiction novel about the murders and suspects. In doing so, he creates his famous work, "In Cold Blood," but he has to pay too big a price for his success.