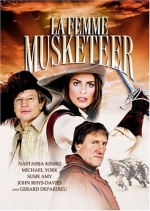 1660. The France is being lacerated by the struggle between the king and the cardinal, each of them is having its own army: cardinal controls guardians, and the musketeers are loyal to the king. Legendary swordsman Jacques D'Artagnan's best days may be well behind him, he has schooled his daughter Valentine (Susie Amy) well in the way of the sword. Now it's time for Valentine to strike out on her own. With her father's sword and a letter of introduction to Commander Flint (Roy Dotrice), the eager young novice sets out to seek her fortune in Paris.