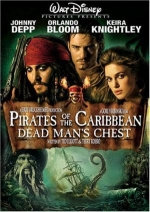 Just before their wedding, Elizabeth Swann and Will Turner are arrested by Lord Cutler Beckett for helping the pirate Captain Jack Sparrow, but Cutler proposes a deal to Will: their freedom per Jack's compass. Meanwhile, Jack is afraid of the sea, because he owes his soul to the evil Davy Jones, the Captain of the Flying Dutchmen. When Will meets Jack, the pirate proposes to exchange his compass by a key owned by Davy Jones. Will goes to the Flying Dutchman without knowing how dangerous and diabolic Davy Jones and his crew are.

User Reviews of Pirates of the Caribbean: Dead Man's Chest