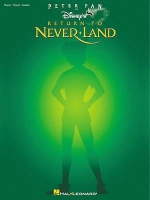 The classic tale of 'Peter Pan' continues in Disney's sequel 'Return to Never Land'. In a world besieged by World War II, Wendy, now grown up, tries to give her own children hope by telling them of her magical experiences with Peter Pan in Never Land. However, Jane, Wendy's 12-year-old daughter, sees it all as make believe and refuses to believe in the tales. That is, until the villainous Captain Hook mistakes her for Wendy and abducts her to Never Land in an attempt to lure and capture Peter Pan. Peter Pan's quest to return Jane safely home is jeopardized until she can begin to believe in the magic of imagination.