Photos of Steptoe and Son 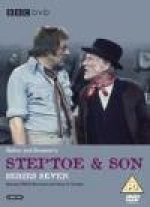 The hilarious British comedy depicts an episode in the life of Albert Steptoe (Wilfred Brambell) and his son Harold (Harry H. Corbett), two carefree junk dealers living peacefully together in the junk yard. All goes well until Harold, who likes visiting hot spots, becomes enamoured of an alluring stripper named Zita (Carolyn Seymour). He loves her so much that he decides to marry her. But when Harold takes his wife home, Albert flies into a rage and schemes to turn his daughter-in-law out of doors by all means.

User Reviews of Steptoe and Son