Photos of Take the Lead 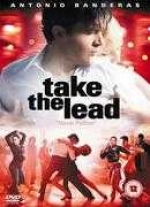 Based on a true story, the movie tells of the struggle of a dance teacher, Pierre Dulain (Antonio Banderas), to give to a group of problem kids a second chance by exploring their dance skills. One night Dulain is astonished to see a boy, Rock (Rob Brown) destroying his school director's car. The following day Dulaine goes to the school to ask for a job as a dance teacher. The director has little confidence in Dulaine's idea of helping kids (including Rock) in detention to reform through ballroom dance classes. Even the kids, who prefer hip-hop or rap, think it isn't a great idea. Despite criticism from students in his formal dance academy as well as from parents and fellow teachers who believe that the kids need more math and less dance, Dulain catches the students' attention with a tango session. After their initial indifference, they eventually compete in a dance contest; the important thing isn't winning, but making a difference.

User Reviews of Take the Lead