The Fox and the Hound 2 Movie 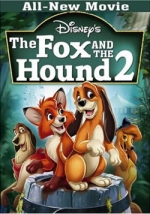 This is a classic fairy tale about friendship and loyalty. A young red fox named Tod (Jonah Bobo) and a bloodhound puppy named Copper (Harrison Fahn) are a needle and thread who stick together until Copper gets a chance to replace a lead singer of a vocal dog group called "The Singing Strays." Copper's sudden success makes Tod feel jealous and threatens to destroy their once unbreakable friendship.

User Reviews of The Fox and the Hound 2