Photos of The Medallion 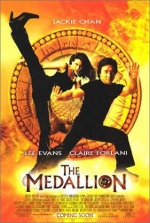 The comedy of situations follows the incredible adventures of an indomitable Hong Kong cop, Eddie Yang (Jackie Chan). After catching kidnappers Eddie happens to get a mysterious medallion which grants him superhuman powers. Teamed up with his British Interpol partner Arthur Watson (Lee Evans) and bewitching British agent Nicole James (Claire Forlani), the immortal detective tries to discover the secret of the medallion and put up resistance against the Highbinders intent on taking the powerful relic away.

User Reviews of The Medallion