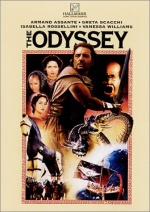 The movie follows the ancient Greek names, thus it is irrelevant to use the Roman name Ulysses. Generally, it was poorly written. Homer's classic epic poem about the hero, Odysseus, and his travels home after the infamous ten year battle of Troy, is brought to the silver screen. The gods seize the opportunity to make Odysseus and his crew the pawns in their games; forcing Odysseus to take unbelievable detours that add years to his journey home. These detours throw him into conflict with great mythological creatures like Circe, the Cyclops, and Poseidon, and ultimately bring him into Hades itself. Meanwhile, Odysseus' wife, Penelope, worries that her husband is dead and is forced to fight off suitors who want to claim his kingdom. Through all of this Odysseus must keep faith and fight to find his way back home, with only the aid of the goddess Athena.

User Reviews of The Odyssey