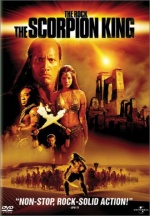 Long before the Pyramids were built, a daring and ruthless conqueror came from the East. He came along with the hordes of his loyal, bloodthirsty warriors and so he subdued ancient lands which fell before the sword of the furious invader. When the world was drowned into the dark waves of chaos, lawlessness and violence, the hero came to ruin the insuperable evil invaders. He was a hireling long ago, and his veins were filled by the scorpions' blood, now he is to defend the world against the evil powers. Let the Biblical city of Gomorrah contemplate the bloody battle!.. This prequel to The Mummy series stars The Rock, a WWE celebrity along with Steven Brand as Memnon (the tyrant), and Kelly Hu as a beautiful sorceress.

User Reviews of The Scorpion King