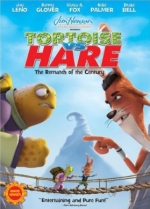 "Unstable Fables: Tortoise Vs. Hare", the second film in the Jim Henson Company's "Unstable Fables" series. The film puts a modern twist on the classic Tortoise and the Hare story with help from a voice cast that includes Jay Leno, Danny Glover, Vivica A. Fox, Keke Palmer and Drake Bell. The movie fast-forwards 15 years beyond the original fabled race to reveal that the rivalry between the tortoise and the hare. Ready for a rematch, Murray Hare (Jay Leno) and his unwilling son Butch (Drake Bell) challenge Walter Tortoise (Danny Glover) and his daughter Crystal (Keke Palmer) to face off in the Mount Impossible Nature Adventure Race. However this time they learn a whole new lesson - that some things are more important than competition.