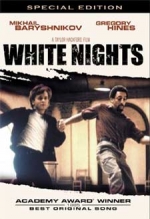 Nikolai Rodchenko (Mikhail Baryshnikov), a Soviet ballet dancer, defects to the West in the hope of gaining freedom. But when he travels to Japan for a performance, his plane unexpectedly malfunctions and makes an emergency landing on a Soviet military airfield. Nikolai is caught by the KGB that tries to brainwash him into returning to the motherland of his own free will. But he wants to get out of the country and manages to make a daring escape once again.